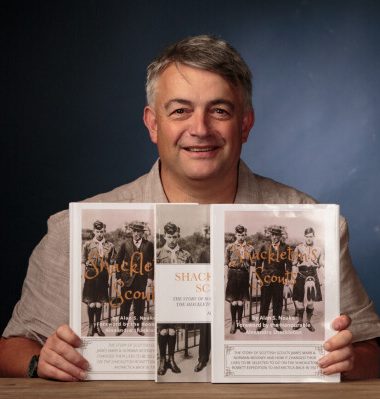 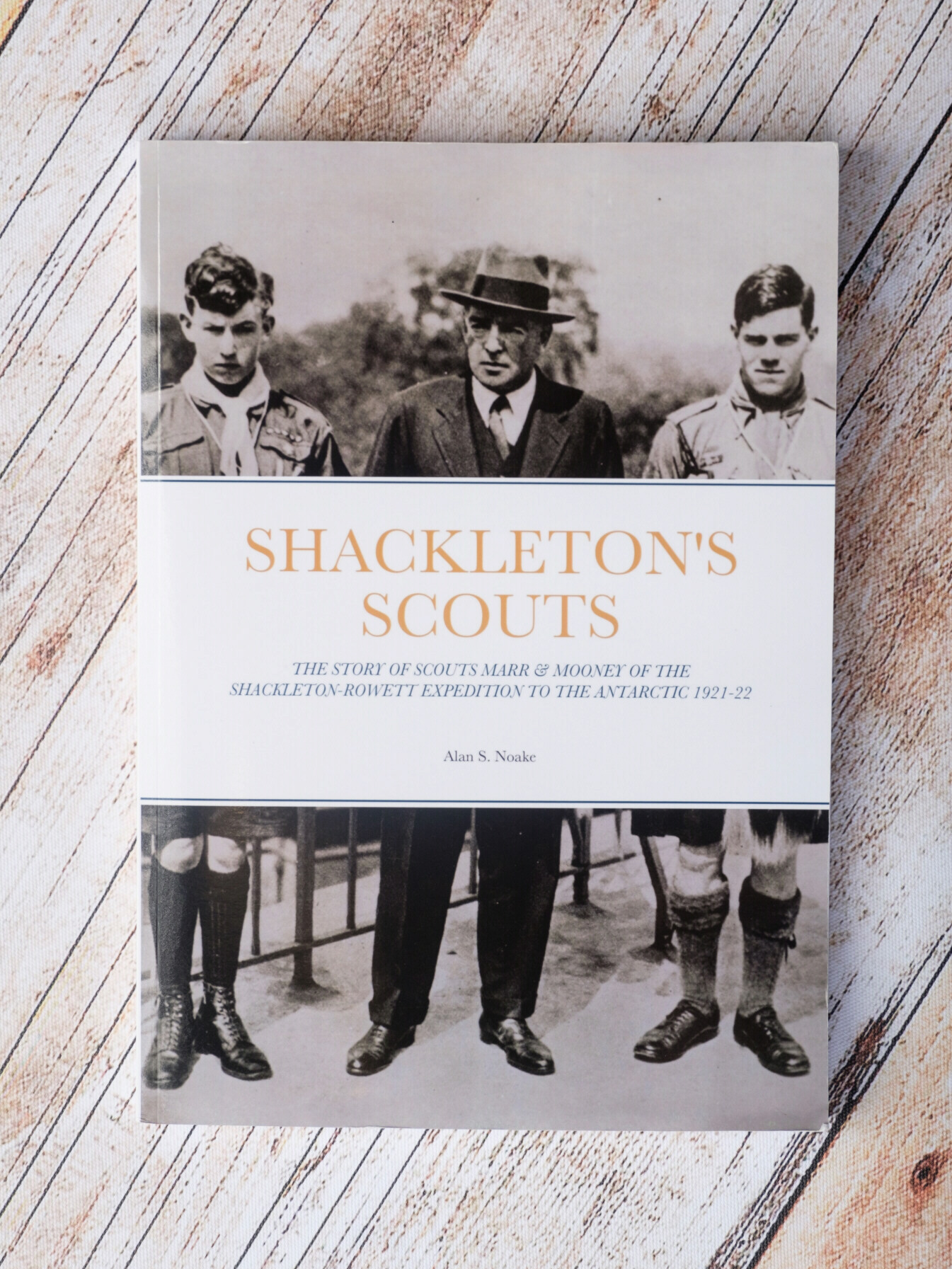 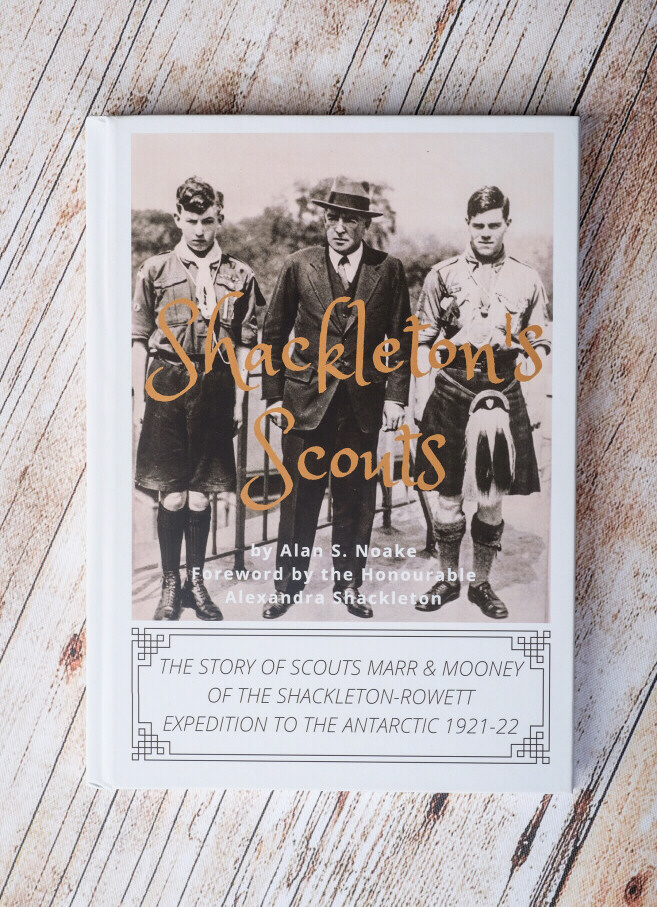 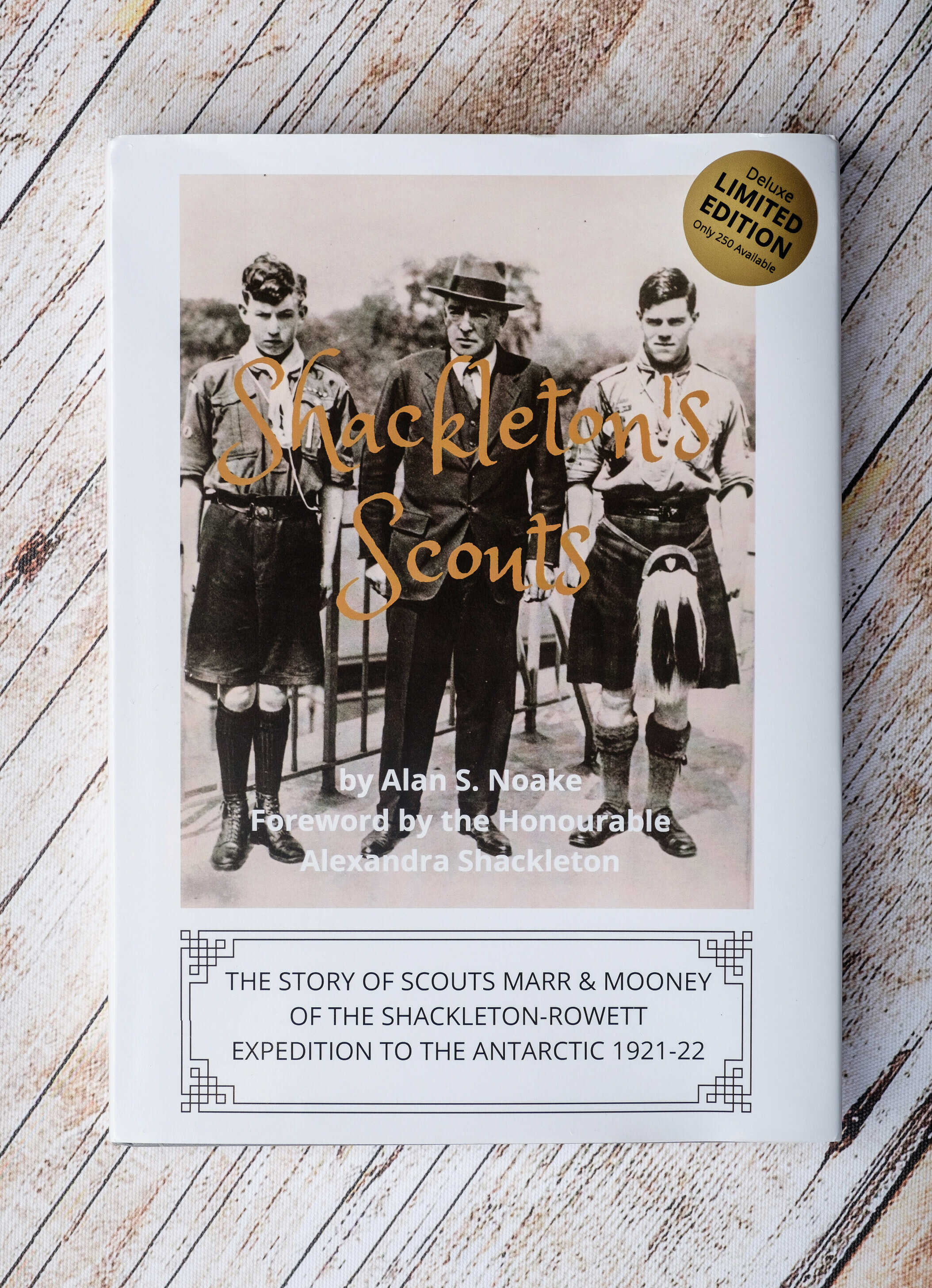 If you are ordering the paperback via LuLu’s or Amazon’s website you can use PayPal, Visa, Mastercard, Amex and more.

25% of the profits from the sale of this book will be donated to the Kent Scouts ReQuest2021 Antarctic Research Project (Charity Number: 303471)

If you are ordering a hardback or deluxe format you will need to pay by PayPal, cheque or BACS bank transfer.

‘Alan Noake’s Shackleton’s Scouts might best be described as a cleverly – researched and illustrated ‘ working dossier’ celebrating Scouting’s ‘brush’ with one of the greatest figures of the Heroic Age of Antarctic exploration, Sir Ernest Henry Shackleton.

The Boss together with his wife,  Lady Emily Shackleton, were fervent supporters of the nascent Boy Scouts and Girl Guides Movements (established in 1907 and 1910 respectively).

I am convinced Ernest and Emily would have both enjoyed reading this timely Centennial account of Scouting’s derring-do in the Great White South.’

Much has been written about my grandfather Ernest Shackleton and his expeditions; but the story of the two Scouts he took on his final expedition ‘Quest’ is less well known.

This excellent book aims to address this in a timely manner, for Shackleton’s death in 1922 during ‘Quest’ marks the end of the ‘Heroic Age’ of Antarctic Exploration. The aims of the inspirational author Alan Noake, Assistant County Commissioner, Global Projects (Kent Scouts) are threefold: to recount the story, and showing great vision, to create the ReQuest2021 expedition to Antarctica, and to help finance it by the sale of this book. I feel my grandfather would have been pleased!

Did you know that two Scouts sailed with Sir Ernest Shackleton to Antarctica in 1921? Personally, I first heard the story of Shackleton’s Scouts back in 2013 when I stumbled upon it on “Johnny” Walker’s Scouting Milestones website by chance and was inspired to buy a copy of James Marr’s book – ‘Into The Frozen South’. (Is anything ever really by chance? My personal radar was already firmly scanning for all things Scouting and Antarctica related. This story firmly ticked both boxes.) Anyhow I was fascinated to find out that James Marr and Norman Mooney were selected from around 1,700 other Scouts to represent Scouting, King and Country on Shackleton’s 1921 expedition.

Sir Ernest Shackleton’s final Shackleton-Rowett expedition (1921-22), also known by many as the ‘Quest’ expedition, marked the end of what has now become known as the Heroic Age of Antarctic exploration. In 1921 King George V was on the throne and David Lloyd George was prime minister, World War One was recently over and The Scout Movement – a mere teenager itself – was only fourteen years old.

Imagine at that time when relatively few people travelled to Europe, let alone to the ends of the earth, being selected to represent Scouting on an expedition of a lifetime to Antarctica. What an honour! What a responsibility! So, with the centenary of the original expedition rapidly approaching I set myself the task of finding different ways to celebrate and raise public awareness of this important historic link between Scouting and Antarctica.

One early idea I had was to raise money for some memorials to Shackleton’s Scouts – one at Gilwell Park (UK Scout Headquarters) and one at Fordell Firs (Scottish Scout Headquarters). At the time of writing the plaques have now been beautifully carved and are ready for unveiling. (See page 132.)

My second idea was somewhat more ambitious and grandiose in scale – to create a Kent Scouts Research Project to Antarctica and where possible recreate the ethos of the original Shackleton-Rowett ‘Quest’ expedition. It was clear from the outset that to achieve this objective we were going to have to raise over one hundred thousand pounds. I now know how Sir Ernest Shackleton must have felt when seeking funding for his grand schemes. You will find a summary of the ReQuest2021 project in Appendix A. 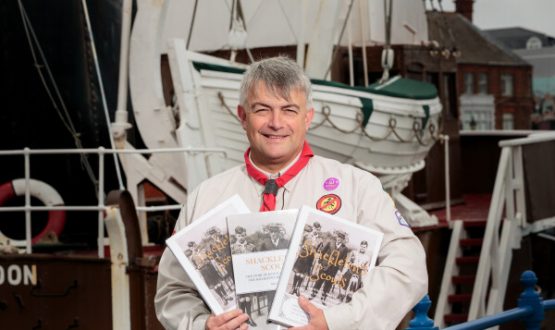 Author Alan Noake has been involved in Scouting since he joined the Lord Mayor’s Own 1st City of London Cub Pack aged 8. He is the Assistant County Commissioner for Global Projects for Kent Scouts. He was inspired by reading an old vintage copy of Scout Marr’s 1923 book – Into The Frozen South. His passion for Scouting and Antarctica led him to find out more about James Marr and fellow Scout Norman Mooney. As a result many years of dedicated research have been put in to producing Shackleton’s Scouts in order to help tell the tale of Scouting’s strong heritage links with the continent of Antarctica.